As every data scientist will witness, it is rarely that your data is 100% complete. We are often taught to “ignore” missing data. In practice, however, ignoring or inappropriately handling the missing data may lead to biased estimates, incorrect standard errors and incorrect inferences.

But first we need to think about what led to this missing data, or what was the mechanism by which some values were missing and some were observed?

There are three different mechanisms to describe what led to the missing values:

MICE operates under the assumption that given the variables used in the imputation procedure, the missing data are Missing At Random (MAR), which means that the probability that a value is missing depends only on observed values and not on unobserved values

The chained equation process can be broken down into the following general steps:

To make the chained equation approach more concrete, imagine a simple example where we have 3 variables in our dataset: age, income, and gender, and all 3 have at least some missing values. I created this animation as a way to visualize the details of the following example, so let’s get started.

The initial dataset is given below, where missing values are marked as N.A.

In step 1 of the MICE process, each variable would first be imputed using, e.g., mean imputation, temporarily setting any missing value equal to the mean observed value for that variable. 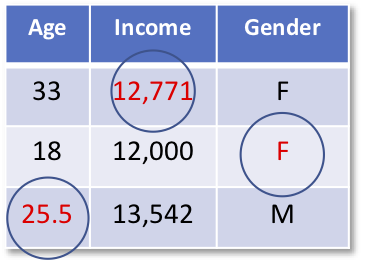 Then in the next step the imputed mean values of age would be set back to missing (N.A).

In the next step Bayesian linear regression of age predicted by income and gender would be run using all cases where age was observed. 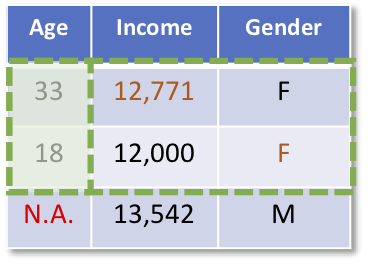 In the next step, prediction of the missing age value would be obtained from that regression equation and imputed. At this point, age does not have any missingness. 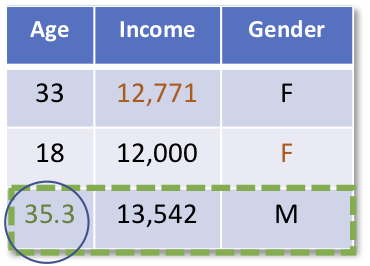 The previous steps would then be repeated for the income variable. The originally missing values of income would be set back to missing (N.A).

A linear regression of income predicted by age and gender would be run using all cases with income observed.

Imputations (predictions) would be obtained from that regression equation for the missing income value. 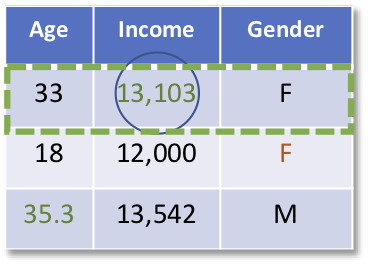 Then, the previous steps would again be repeated for the variable gender. The originally missing values of gender would be set back to missing and a logistic regression of gender on age and income would be run using all cases with gender observed. Predictions from that logistic regression model would be used to impute the missing gender values.

This entire process of iterating through the three variables would be repeated until some measure of convergence, where the imputations are stable; the observed data and the final set of imputed values would then constitute one “complete” data set.

We then repeat this whole process multiple times in order to get multiple imputations.

* Let’s connect on Twitter (@ofirdi), LinkedIn or my Blog

What is the difference between missing completely at random and missing at random? Bhaskaran et al https://www.ncbi.nlm.nih.gov/pmc/articles/PMC4121561/

Multiple Imputation by Chained Equations: What is it and how does it work? Azur et al https://www.ncbi.nlm.nih.gov/pmc/articles/PMC3074241/

View all posts by Ofir